This is a brief history of science at Wesleyan from its beginning in 1831 until about 1942, when we became involved in the second World War. Perhaps it might better be called a story rather than a history. It is a quick summary of what has seemed to the author to be especially important or interesting.

The following subjects are included: astronomy, biology, chemistry, geology, mathematics, physics, and psychology. There is some account of research and of educational policy in each of these fields and of the personnel involved. At the end there is a chronological list by departments of all science instructors from 1831 to 1961. With rare exceptions, the only scientists whose works are summarized in the accounts of the several departments are those who were here long enough to become professors before the second World War. Unfortunately, the author does not have in most cases memoranda characterizing these men as persons, and so the account is biased because he has relied on his own memory of them. Many were his teachers or colleagues, and in these positions they often affected him strongly one way or another; and on top of that, memory is unreliable. For his analysis of them as scientists, he has relied mostly on written accounts furnished by present faculty members and on some old ma- material in the Wesleyan Room of the Olin Library. He is much indebted to Archivist John Spaeth for his help in assembling much of this material. Among the most useful items was the Wesleyan University Bulletin number 40 (old series), issued in June 1911, “A Record of Scientific Work, 1831-1911.’ As was then customary the Bulletin did not disclose authorship, but it happens that this writer was in fact the editor and now remembers that the department histories were written by representatives of these departments, usually by the chairmen, and that the bibliographies were supplied by the authors themselves.

In every department there have been notable achievements and a lively sense of whatever at the time was thought inter- interesting in educational policy. But perhaps the most noteworthy characteristic of these years has been the breadth of educational ideals manifested. In recent years there has been at Wesleyan and in some other places special emphasis on liberal learning. When this author first joined the Faculty (1904), it was taken for granted that both the arts and the sciences were liberal learning, and many who were scientists excelled in the arts. Among the Faculty who wrote most eloquently was the professor of geology, and few were as gifted in written prose as the professor of physics. It was said that Professor Rice read his New Testament in the Greek every morning before breakfast. 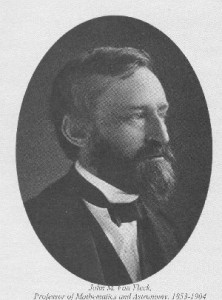 Science was thought of as a part of the philosophy of life, and this was Caleb Winchester’s theme when he wrote the hymn in dedication of Judd Hall of Science; this was before anyone had said that metaphysics was dead, and it was supposed then that when one wanted to find out why the universe- verse was, it would be useful to discover what it was. It was also emphasized in those days that scientific research had an ethical character. It compelled integrity, for science sought not what one wished to find but what was. All our teachers taught this, but the one who seemed to many of us to teach it most effectively was J. M. Van Vleck (“Uncle Johnny”), who I think never said anything about it. There he sat in his swivel chair, and he thought he was teaching us astronomy, some of which we did not understand and most of which we would forget; but all this time he was giving us something else which we could not forget, his instinctive honesty. He had one of the best minds I have known, but it was not his mind but his character that made the permanent impression. All our scientists- would have recorded their observations objectively and none would have intentionally deceived anybody else, but Uncle Johnny was unusual in the care he took not to deceive himself. Somehow this was immediately obvious to us all.

Bibliographies have not been included. Complete material is not available, but if available it would be too extensive unless very carefully pruned. Also, in general, only important or striking scientific research of the various scientists has been noted. But this word “research” has by now been greatly expanded in meaning. In the strictest sense, scientific research is an attempt to make an original and important discovery not before published anywhere in the world. In the loosest sense, it is what a high school student may do when he reads an encyclopedia. Between these two extremes lies much that is important and useful; for example, M. B. Crawford’s work with X-rays and W. P. Bradley’s construction of a liquid air machine. Both had much local importance and interest but were not primary discoveries. In summarizing the work done at Wesleyan, therefore, although the emphasis has been on research of the ideal kind, it has seemed better not to be always so restricted, for this story is being written primarily for alumni and faculty who are naturally interested in local matters. My apologies for including also so many personal memoirs. These are some of the men who made this college, and I would like to help make them live again.