Until 1914, when Frederick Slocum came to be Professor of Astronomy and to supervise construction of the Van Vleck Observatory, this subject was the responsibility of the Mathematics Department, and some account of it is included under the heading Mathematics. Not until then was there any astronomical research done here, and advanced teaching was limited to an occasional single course beyond the elementary one. The history of the scientific work at the Van Vleck Observatory from 1914 to 1960 is given in a recent brochure entitled, “Van Vleck Observatory.” During the period now under review, the principal emphasis was on the measurement of stellar parallaxes and proper motions, a program in which many observatories joined. 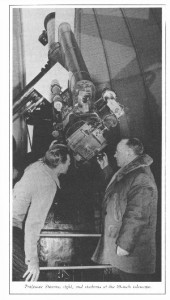 At first these measurements were made optically, then photographically. This was work that could be done well by astronomers located in the less favorable atmospheric conditions. Eventually Carl L. Stearns and Bancroft W. Sitterly joined Slocum in the department, and the three made an effective research team in which each obviously ad- mired the other two. They shared equally in the observing program, and the telescope was used on every clear night; that is, on six nights in a week, for on the seventh the astronomers rested. Other problems were also worked on, such as solar eclipses (1925-32) and solar parallax (1932).

Slocum’s father had been a sea captain, and everything about the new observatory was in shipshape order. He had planned it well. After it had been in use for several years, he was asked what he would then have liked to change could he build it over again. He replied that he would change the location of one electric outlet. Many remember him as a charming lecturer, a kindly but demanding teacher and a great friend. He was punctilious without being pedantic. After his wife died he, a neighbor, sometimes came to lunch. Once he was told that lunch would be at 12:30, and when he rang the bell our little daughter looked at the kitchen clock and said, “Mother, the clock is a minute fast.” But if I were to make a tribute to him, it would be not to his distinction or to his charm but to his courage. I saw this when he was dying and hoped that the time would come when I could say it in print.

For the determination of stellar positions, one needs special apparatus, and in 1922 we acquired a new 20-inch refractor, the largest then in New England, with an excellent lens. After the lens was mounted, a Hartmann test was made, and the Hartmann constant, a measure of the quality of a lens, was found to be .084. (When this constant is less than .50 the lens is of a very high quality.) “For photographic purposes this telescope is equipped with a double slide plate carrier. The telescope has a long focal length and therefore one can obtain star positions with an accuracy of .05 of a second of arc, which is the apparent diameter of a silver dollar at a distance of a hundred miles.” The 12-inch telescope which had been housed in Observatory Hall was given to Miami University in Oxford, Ohio. The old 6-inch refractor, which President Willbur Fisk had bought in Paris in 1836, is still with us and is mounted in the small dome of the observatory for student use.

One fine night when Stearns was about to take some measurements on one of “his” stars, he noted a fuzzy object nearby. It could have been a nebula which he had not noticed before, and so he consulted a catalogue of nebulae, and found none there. After an hour this fuzzy object had moved, and so now he knew that what he had been looking at and had failed to recognize was not a nebula at all but Stearns’s Comet. He got a medal for this discovery, took many photographs and computed the orbit. This comet did not become, like some, a spectacular apparition. It stayed in telescopic view for a while and then receded. Now presumably it is in a distant part of its orbit where its right ascension and declination are known only to God and its discoverer, who said it will be back again after 28,000 years.

During the first World War, Professor Slocum was absent training would-be captains of “liberty” ships in the science of navigation, and then he spent some time at his alma mater, Brown University, before returning to our observatory. In the second World War, he continued teaching astronomy while Stearns took charge of the navigation theory taught in the Wesleyan unit of the Navy Flight Preparatory School (V-5), and Sitterly joined the radar research group at Massachusetts Institute of Technology.

Since the retirement of Stearns in 1960, the chairman of the department has been Professor Thornton Page, who joined the Faculty in 1958 after services as Deputy Director of the Operations Research Office at the Johns Hopkins University.