During the period under review, there have been in this department three professors-Herbert W. Conn (1884-1917), E. C. Schneider (1919-1945), and H. B. Goodrich (1916-1956), and others who have become professors since then. These three men all attained national distinction in ways to be noted, and under their guidance the department grew from its small beginning until in 1928 it occupied the whole of Shanklin Laboratory. 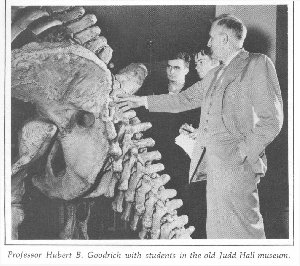 The contributions of Conn are well described in a memorial address by Professor C. H. Winslow (Yale) in 1917 and especially in the personal account given by Conn’s son, Harold J. Conn, when in 1948 he gave the presidential address at the 48th general meeting of the Society of American Bacteriologists, a society which his father and two others, all members of the American Society of Naturalists, had founded about 50 years earlier.

Son Harold told of his father’s foibles as well as of his distinctions, as a son should. Conn had been a brilliant student both in college (Brown University) and graduate school (Johns Hopkins). But “the one subject he never could master was spelling, nor did he acquire this accomplishment to his dying day.” This author can testify to that. Winchester and I were reading a special examination Conn had written on the blackboard, and I well remember Winchester’s amusement. He hadn’t realized said he “that Professor Conn was now teaching music.” The written words were “spinal chord.”

In 1894 Conn made the original discovery that a typhoid epidemic could be caused by germs in oysters. This was some years before I arrived, and one must make allowance for time’s embroidery, but the story as I heard it was as follows. A bad typhoid epidemic broke out in college and some students died. It was supposed that the cause must be something eaten or drunk, and the search for this cause was helped by the fact that the students and alumni affected belonged only to certain fraternities. After some study, it was found that those fraternities and only those had had raw oysters at their initiation banquets, but there were two exceptions. Two boys from the non oyster-eating fraternities had typhoid, but then it came out that these two boys had gone down to buy oysters with other boys from the oyster-eating fraternities, and that while at the fish house the owner had, out of the goodness of his heart, fed them bacteria on the half shell. So the case was tight, and eventually the state was condemning oyster beds near New Haven.

Conn became immediately famous as a bacteriological sleuth. But among the oyster dealers of the region, he was not so popular. If you asked them, they would say that all this professor stuff about germs was only that much theory, but if you would take a practical man, one who had actually been in the business, “he could tell a good oyster the moment he opened the barrel.” A full account of this investigation was given by Conn in the Report for the State Board of Health for 1894. It was much more extensive and thorough than might appear from the story recounted here. J. M. Van Vleck and Rice also served on the investigating committee.

Conn’s writings were numerous. His books on bacteriology, physiology and hygiene, and evolution went through several editions. He was also Pre5ident of the 5ociety of American ]3a@teriQlQgi5t5 frqm 1699 to 1902, and held at various times many other important positions, including the directorship of the Connecticut Public Health Laboratory in New York City. He fought many battles with legislators and entrenched interests to secure the adoption of good standards in the dairy industry, and during the latter part of his career he did pioneer work in dairy bacteriology. Professor Winslow said that Conn’s greatest contribution was that he “saw more clearly than any other man in this country the vital importance of applying to the problems of the farmer and the dairyman a knowledge of the important part played by micro organisms in the processes with which they deal.”

Professor Edward C. Schneider had attained distinction before coming to Wesleyan in 1919. He had been at Colorado College for fifteen years, where he had gone at the age of twenty-nine. There in the Rockies he had pioneered a study of the medical effects of low oxygen and high altitude. He and his students, he in the pictures looking as young as they, had travelled up and down Pike’s Peak on the cog railway holding each other’s wrists and observing also respiration rates and blood pressures. At that time Colorado College was not a wealthy institution. The amount of funds available for biological research must have been small, and Schneider was smart to seize the peculiar advantage the college did have. If one wanted to study the physiological effects of high altitude, Colorado College had in its own back yard a piece of apparatus, 14,000 feet high, hard to beat anywhere. One can imagine that the enterprise was greeted with enthusiasm by the students. 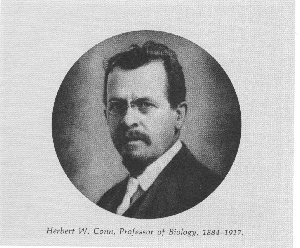 So, when the first World War came and the Air Force needed knowledge in this field, much had already been done, and more was quickly organized. Schneider and others went to France with the expeditionary force, and it was there that the famous Schneider test for pilots was devised, a test that was still being used in the second World War. He became a major in the Sanitary Corps of the United States Army and later a lieutenant colonel in reserve, and for six years after joining the Wesleyan Faculty he spent two days a week and vacations at Mitchell Field, where he had been Director of Research at the School of Aviation Medicine. Later he transferred some of these studies to our laboratory, problems of physical fitness, training of athletes, and the physiology of the adolescent boy. His most influential book incorporating this work was The Physiology of Muscular Activity. This went through three editions. Many students, both here and at Colorado College, became much interested in biological research as a result of their work under Schneider’s direction, and achieved recognition in graduate school and thereafter. In 1942 Schneider received the John Jeffrey Award from the Institute of Aeronautical Science.

Professor Hubert B. Goodrich was well known for his work in the general field of genetics, particularly in the embryological development of genetic characters in tropical fish, and in the course of these studies, he developed a new one, the “blond guppy.” While a graduate student at Columbia, he became a research worker at the Marine Biological Laboratory at Woods Hole, Massachusetts. He spent many summers there throughout his life, and was a trustee from 1931 to 1949. He was also Vice-President of the American Society of Zoologists in 1939. His work on fishes involved chemical work and transplantation of fish scales.

Many strange things happened. It is interesting, for example, to note that a gold fish looks golden, not because something has been put on it, but because several things have been taken away. It starts in a “dark form in which later the melanphores disintegrate leaving the red chomatophores, and these in turn may suffer partial destruction, leaving the gold and silver.” Goodrich worked also in many other marine laboratories, Tortugas, Honolulu, Bermuda, Bernini, and a sabbatical leave was spent in Europe, California, and Honolulu. Special students in biology began going to Woods Hole from Wesleyan in the summertime early in the 20’s. At that period, to quote the Alumnus (1922), “the Woods Hole Laboratory has stimulated similar ventures elsewhere, but at present, there is but one other rival in the world, the Stazione Zoologica at Naples.”

Goodrich had long been actively concerned with stimulating research at Wesleyan. A few years before his retirement, in collaboration with Professor R. H. Knapp, of the Department of Psychology, and others he undertook a thorough-going investigation of the educational and social factors that seemed to be most important in motivating American undergraduates to choose science as a vocation. The results of this study were set forth in a book, Origins of American Scientists, (published by the University of Chicago Press, 1952), of which Goodrich and Knapp were the co-authors.

Ross A. Gortner, Jr., Professor of Biochemistry, appointed to the Faculty in 1937, is the only member of the present staff of the department whose appointment antedates World War II. He is the co-editor, with W. A. Gortner, of Outlines of Biochemistry (3rd edition, 1949). Vincent W. Cochrane, a Cornell graduate, who joined the department in 1947, is the author of Physiology of Fungi (1958), an authoritative work in this field.

In the curriculum, biology has always been a popular subject. During a large part of the last fifty years, it has been a natural choice for the satisfaction of certain laboratory requirements. Even earlier, however, in Conn’s time, it was elected by many students; Conn had said he would not want any required course in biology.