In the period 1873 to 1941, there were four men who taught chemistry and became professors of chemistry, Atwater, Bradley, Hoover, and Hill, all colorful figures, but by far the most colorful and most widely known was Wilbur 0. Atwater (1873-1907). He and Professor Raymond Dodge (in Psychology) had sufficient recognition to be listed in Webster’s Biographical Dictionary (1943).

Atwater was a graduate of Wesleyan (1865) and one of the first men to receive a Ph.D. at Yale. He was internationally known for his research on nutrition and for his invention of the respiration calorimeter. This machine recorded the amount of energy obtained from various foods. Students were commonly used as live subjects. They slept in the calorimeter, studied in it, or rode a bicycle in it. Sometimes they drank alcoholic beverages in it, in the cause of science. As a result, Atwater announced that alcohol could be taken into the body and consumed as food and a certain amount of energy could be obtained. “But,” as “Bobby” used to say in his lectures, “when you young gentlemen go down to a certain place on lower Court Street (Chaffee Hotel) you do not go for food.” 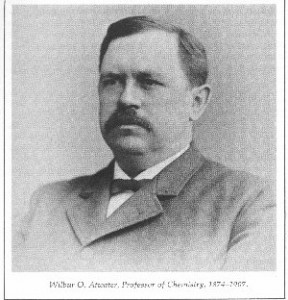 As a result of this experiment, Atwater got notice not only in the scientific journals but in the religious press also, and once in a funny paper. In those days, alcohol was not publicly consumed on the campus except in this calorimeter. The subjects were paid a small sum for this service. One of the most important contributions of the calorimeter was a definite proof that the law of conservation of energy applied to living organisms as well as to inanimate matter. This was a decisive argument against the theory of vitalism. Vitalism was the doctrine that the function of a living organism was due to a vital principle or force distinct from physical forces. This impact of Atwater’s work is discussed at some length by W. N. Rice in his Christian Faith in an Age of Science (1903) and is summarized in the following statement (page 139): “The average result of forty-five experiments, extending over periods amounting in the aggregate to one hundred and forty-three days, was that the energy determined as given off from the body did not differ by any measurable quantity from the calculated potential energy of the materials oxydized in the body.”

Atwater deserves prime credit for creating the atmosphere of research here. His older colleagues did not always like the way he avoided committee work and other college jobs, which they said “somebody had to do”, in order to get on with his research. But he chose the more important activity, and the younger men were greatly stimulated by him. Dodge attributed his own success at Wesleyan to the stimulating atmosphere he found here and said he was specially inspired by Atwater.

The calorimeter was located in Judd Hall, which was then the home of the Chemistry Department, reputedly one of the earliest chemistry laboratories in the country. It was moved to the Hall Laboratory in 1927. Professor F. G. Benedict collaborated with Atwater in building the calorimeter before he left Wesleyan in 1907 to become the Director of the Nutrition Laboratory of the Carnegie Institute in Boston. Atwater founded the first Connecticut Agricultural Station, which he afterwards directed, at Wesleyan from 1875 to 1877, and at Storrs from 1885 to 1902. He also founded the Office of Experiment Stations for the United States Department of Agriculture. If one is diet-conscious and becomes interested in the nutritional values of various foods, he may find an excellent table published by the United States Department of Agriculture; the preface to this table states that the study was done first by Atwater.

Professor Walter P. Bradley’s work was at first in the field of cryogenics, and he built for Wesleyan the first liquid air machine in any American college. His lectures on liquid air, then a new material, were local sensations. Later he became widely known for his work in rubber chemistry. He resigned in 1914 to join the United States Rubber Company, where he established research laboratories.

Charles R. Hoover was a dynamic leader and very active in chemical associations, especially in the Connecticut Valley Section of the Amer- ican Chemical Society. He drove himself and all his associates at top speed, his car too, but with superb skill. He worked in the fields of colloid chemistry and industrial waste pollution and invented a device for detecting and absorbing noxious gases. At the beginning of the second World War he worked on illuminating bombs to be dropped at night by reconnaissance planes. In one of these experiments on June 8, 1942, he was lost at sea when his blimp crashed in the Atlantic. This research was done for the organization which was afterwards called ORDWES, and was then carried on by G. A. Hill and later by R. G. Clarke. At first the bombs were exploded in the athletic cage, but when the explosions became so powerful that they would shatter the glass, the project was moved to a corner of Bradley Field, where they rattled windows in Windsor Locks.

G. Albert Hill did fundamental research on the chemistry of natural products, and was well known for his work and lectures on poison ivy. He was a striking figure as Marshal of the Faculty, an office which he handled very effectively and with enjoyment. Hill kept his appointments to the second and rightly objected to tardy people who stole other people’s time. He got to his classes early, and when the bell rang he locked the doors and began lecturing. They stayed locked. When President McConaughy became Governor of Connecticut in 1947, he appointed Hill State Highway Commissioner, a post in which he served with distinction for eight years. He later became Director of Redevelopment of the City of Middletown.

Although J. Elmer Cavelti (Wesleyan ’18) did not attain the rank of professor before moving to Allegheny College in 1936, his contribution as a teacher was so outstanding that, as the departmental history says of him, “no mention of past staff could possibly omit his name, for he was certainly one of the best teachers of chemistry ever to be on the Wesleyan Faculty.” While at Wesleyan he was a consulting chemist of the Goodyear Rubber Company.

The only member of the present chemistry faculty whose appointment was earlier than World War 11, besides R. A. Gortner, Jr., previously mentioned as Professor of Biochemistry, is M. Gilbert Burford, appointed in 1936, four years after his graduation from Wesleyan. Among other activities Burford has served for some years as consultant to the Connecticut Water Resources Commission and to the New England Interstate Water Pollution Control Commission. Jose Gomez- Ibanez, who joined the Faculty in 1942, after graduate study at Oberlin and Cornell, is co-author, with A. J. Scarlett, of General College Chemistry (1954). John W. Sease, who was appointed in 1946, coming from the California Institute of Technology, works in the field of organic chemistry. He served actively as the chairman of the Faculty committee which assisted with the planning of the new Science Center.