At the annual meeting of the Trustees in June, 1875, a letter was read from W. N. Rice and G. B. Goode, Professor of Geology and the Curator of the Museum, respectively, requesting the services of a student assistant, J. K. Pillsbury, later to be Professor of Biology at Smith College, to be paid $400 for the year, and that for this purpose half of that amount be deducted from each of their salaries. This request was granted. It is, so far as I am aware, the first recorded instance of the recognition by this Faculty that it is poor economy to require or even to permit low grade work to be done by high grade men. This lesson had not really been learned by other professions at that time or even by industry except in rare instances.

Although geology was taught from the foundation of the college, geology as a separate department began with the appointment of William North Rice in 1867 as Professor of Geology and Natural History. He had graduated from Wesleyan in 1865 and had received from Yale the first Ph.D. in geology ever granted by a North American University. The distinguished Dana had been his teacher, and his thesis was an analysis of The Origin of Species. Years afterwards, when Rice lectured on science and religion, students marvelled at his familiarity with this work of Darwin’s; this was the explanation.

Goode, an 1870 graduate of Wesleyan, was Curator of the Museum from 1871 to 1879, and then resigned to give all his time to the great National Museum at Washington. Rice, like many others in his day, did many other things not related to his special department. He served for two years (1907-09) as Acting President, and probably his greatest course was not in geology but “Science and Religion,” which was elected by many and contained in addition to theological matters a survey of all sciences, so that in that day it served as a very successful course in general science. 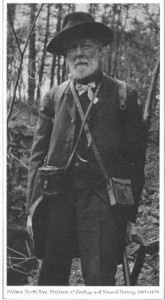 As with the elder Van Vleck and Morris B. Crawford one cannot summarize Rice’s contribution to learning or even to science by recounting his work in a specialized field. To his students and to the larger audience reached by his writings “Billy” knew all science. He even taught at first in most of the scientific departments and used to say that he had not a chair but a bench. He was also a theologian and well-read in philosophy. Having what were then heretical views, he was usually in trouble with the ministry. He was a little man in stature but a great fighter, and if anybody wanted to try him for heresy he was quite ready to be tried. Those were the days when the student body came generally from fundamentalist homes, and it was Billy who made it possible for them to make the transition to modernism. A generation later Harry Emerson Fosdick was to render a similar service especially to the people of New York City. Billy’s lectures on science and religion were afterwards (1903) put into his book Christian Faith in an Age of Science. He displayed an unusual mixture of calm objective reason and eloquent appeal to emotion. This, he said, was due to the fact that he had both a father and a mother. He said that when he was logical “that was mother speaking,” and that when he wrote a peroration which was “meant for applause, that was father.” Perhaps his most eloquent public address was given to a packed chapel audience in June after we entered the first World War. This was afterwards published and called Through Darkness to Dawn. In this he did for Kaiser Wilhelm what Winston Churchill was to do later for Mussolini (in his “jackal” speech), and father got quite a hand. Excited alumni met each other on the campus with gleaming eyes and said that this was the first time they ever heard Billy swear. According to the printed word all that he said was “The German white paper is black with damnation,” but he did say this with emphasis.

Rice’s strictly scientific contributions had to do with studies in min- eralogy and with geological surveys. He was for many years, beginning in 1903, Superintendent of the Connecticut State Geological and Natural History Survey. He was Vice-President of the American Asso- ciation for the Advancement of Science in 1905, a founding member of the American Society of Naturalists, President (1891), and Vice- President of the Geological Society of America (1911). At the time of his retirement in 1918 he had served on the Faculty for fifty-one years. He died ten years later at the age of 83.

In the years 1907-1909 Isaiah Bowman came up from Yale and gave a course in physical geography. In 193,5 he became the distinguished President of Johns Hopkins University.

Wilbur G. Foye came to Wesleyan in 1918 and was Professor of Geology from 1924 to 1935, when he died at the early age of 49. He was joint author with Professor Rice of Guide to the Geology of Middletown, Connecticut, and Vicinity (1927). Like Rice, Professor Foye had a wide range of interests, and his publications extend from the geology of the Fiji Islands to mineralogy, to petrology of igneous rocks, and to the geology of the eastern highlands of Connecticut.

Joe Webb Peoples, who succeeded Foye in 1935 and became Professor of Geology in 1945, is still active in the work of the department. In the period before the War he became interested in chromite deposits and, partly as a consequence, was taken from his Wesleyan work to devote full time during the war years to the United States Geological Survey, becoming Assistant Chief Geologist for two of those years (1944-46). Since 1960 he has been the Director of the Connecticut Geological and Natural History Survey.