During the early years of this century freshman mathematics continued as an absolute requirement for graduation, and if a student failed once he was allowed to repeat it until he had passed. The course was sufficiently rigorous, so that many did fail, sometimes as many as 40 percent of a section, with the result that there were always a large number of repeaters in a class. Trigonometry was offered twice a year, so that it was theoretically possible for a student to take it eight times; but to the knowledge of this writer six was the record. In this particular case the boy was an excellent second baseman and probably never looked at his mathematics book, but eventually he absorbed enough sines and cosines from the atmosphere to serve his life purposes.

Later this absolute requirement of mathematics was changed to the alternative of mathematics or Latin, and eventually was dropped, to the benefit both of the good student and of the poor, and to the relief of the Department of Physical Education. The choice of mathematics or Latin was a common one elsewhere and, according to P. S. Jones (American Mathematical Monthly, 1967), this was because over many centuries these subjects had been thought of as especially valuable as mental discipline; but to one who followed the debates in the Wesleyan Faculty the purpose here seemed to be rather more pragmatic. For some time the classics had been slipping in popularity, and so it was hoped that Latin would be chosen by many as the lesser of two evils. In still earlier days there had been a Sophomore choice between calculus and Hebrew, and Winchester is said to have chosen Hebrew.

In common with other colleges there was early experimentation with certain combinations of courses called Unified Freshman Mathematics, but the only combination that worked well here was the infusion of calculus into analytic geometry, and this was eminently successful. Other elementary courses which had a vogue and went their way were solid geometry, theory of equations, and the theory of investment and insurance. During many years mathematical statistics was taught on an elementary and also on an advanced level, and several students became actuaries as a result, some rather well known. The department also offered the usual advanced subjects useful in the physical sciences, and in this way rendered a valuable service to many able students specializing in other departments. 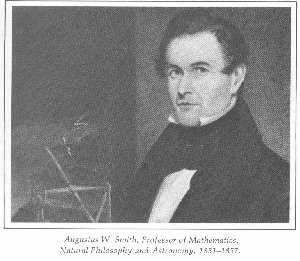 From 1831 until 1914 astronomy was taught in the Department of Mathematics, and for most of that long period of time by just two men, first, by Professor A. W. Smith and after him by his pupil and successor, Professor J. M. Van Vleck. When the latter retired in 1904 the astronomy assignment fell to the lot of this writer, he having had some graduate study in the field.

There was at that time in the turret of Observatory Hall a very good 12-inch telescope, with a firm stone mounting sunk deep in the ground. Observatory Hall was a long, brick, three- storied building, made entirely of wood except for the outside walls. It had been built in 1839 as a “boarding hall,” as it was called; it was renamed “Observatory Hall” in 1868 when the turret was added to the building to house the newly acquired 12-inch telescope. Students and some members of the Faculty occupied some of the rooms, and the third floor was used for mathematics. Above the third floor a narrow wooden circular stairway leading to the observatory provided a beautiful chimney, rising from a wider stairway that extended to the ground. So our first duty was to get a long rope, knot it, and hang it ready for use. This might have worked, for there was only a short drop from the turret to the roof; but fortunately Observatory Hall never caught fire while anyone was in the observatory. Some fires broke out at other times, but there was always somebody around to put them out. There was other valuable apparatus for astronomical use, as already described in the section on Astronomy. 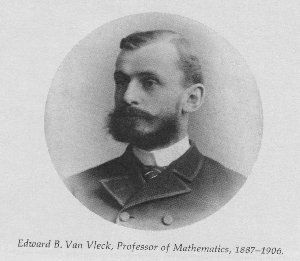 In the field of mathematical research it was clearly Professor Edward B. Van Vleck who led the way. His work on continued fractions and divergent series was already well known before he was called to the University of Wisconsin in 1906. After leaving Wesleyan he was to become President of the American Mathematical Society (1913-15) and a member of the National Academy of Sciences. He had already become an editor of the Transactions of the American Mathematical Society (1905-10). Others followed Van Vleck’s lead, and the department produced many original papers after that in various fields.

Leroy A. Howland, a Wesleyan graduate of the Class of 1900, was initially interested in algebra and in geometry and was an editor of the Annuals of Mathematics (1910-11), but he soon got involved in administrative work, serving as Wesleyan’s Vice President (1921-26 and 1927-35) and Acting President (1923-25). Burton H. Camp’s work was first in analysis and then in mathematical statistics and probability. He spent a year on this subject at the Galton Laboratory in London, and was a founder and later President of the Institute of Mathematical Statistics (1938) and Vice-President of the American Statistical Association in 1937 and 1938. Malcolm C. Foster and Herbert E. Arnold (Wesleyan ’20) both worked in geometry, but Arnold, too, turned to statistical theory toward the end of his life. Both died before reaching the age of retirement.

The senior member of the department at present is Robert A. Rosenbaum, who came to Wesleyan in 1953 from the faculty of Reed College as Professor of Mathematics. He has taken a prominent part in the affairs of the Mathematical Association of America and has served as a vice-president of the Association and as editor of the American Mathematics Monthly. His Introduction to Projective Geometry and Modern Algebra was published in 1963. Most recently his services have been claimed for administrative duties, as Dean of the Sciences (1963-65) and as Provost (1965-67). In 1967 he became Academic Vice-President and Provost.