The history of this department until 1944 is given in a brochure, edited by David C. McClelland ’38 celebrating the fiftieth anniversary of the Psychological Laboratory. This is a source of much of what now follows: “Psychology probably began at Wesleyan,” according to McClelland, “as a course in mental philosophy taught by President Willbur Fisk. . . in 1831.”

Another president, Joseph Cummings, taught psychology for 19 years. President McCosh of Princeton taught psychology there, and he was responsible for the graduate training in this subject of Andrew Campbell Armstrong, who came to our Department of Philosophy in 1888. 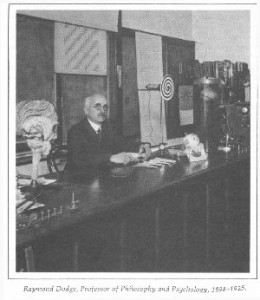 Psychology remained a course in the Department of Philosophy until these two departments were separated in 1912, and it was then that Raymond Dodge, who had been made Professor of Psychology in 1902, took charge of this department. Until Dodge came, there was practically no work in experimental psychology, and the approach had been primarily rational rather than empirical.

The department is noted for the number of distinguished psychologists who have studied or taught here. Two distinguished men who first took psychology with Armstrong are E. L. Thorndike and C. H. Judd. Judd taught here for two years just before Dodge came. I did not come soon enough to have him for a teacher but I well remember him as a speaker at student gatherings, his ingenious wit, and his flashing smile. He spoke easily and rapidly and was very popular. He was not thought of as a better thinker or teacher than Armstrong, but as quite a different personality.

There are many stories about Armstrong; they attest to the student view of his mental power and crisp responses and quite definite refusal to try to be popular. His interests were chiefly philosophical, and therefore he was not truly one of our scientific faculty. Dodge came in 1898 as an instructor in philosophy and before long made Wesleyan distinguished in experimental psychology. He brought to this subject the versatility of one gifted in engineering and thus was able to do for psychology what had not been done before. This often happens when ability in one science is applied to another. Dodge left Wesleyan in 1925 and went to Yale and became very well known. He was made a member of the National Academy of Sciences and of the American Academy of Arts and Sciences and President of the American Psychological Association. He and Atwater were two Wesleyan scientists who received enough world recognition to have their biographies in Webster’s Biographical Dictionary (1943).

Dodge was my teacher and later my colleague. McClelland has paid tribute to the excited interest he always felt for his subject as well as to his scientific achievement. As far as we students were concerned it was important that he should be an interesting teacher, for our text was Sully, a dull book if there ever was one. Thorndike blamed the department for putting up with Sully as long as it did when James was available. Armstrong had introduced Sully as an improvement over the earlier McCosh, which he had brought with him from Princeton.

The students of those days did, like Thorndike, find James in the library, but there was not much time to read it, and my memory (after fifty years) is that we looked on James with some suspicion because he made the subject interesting. At any rate, there was another book of his nearby on the varieties of religious experiences, and it seemed to give the impression that when John Wesley “felt his heart strangely warmed” this was not necessarily indicative of an objective Presence. Nevertheless, the godly students of those days did read this book too, furtively.

In 1901 Walter Fenno Dearborn worked with Dodge as a graduate student, and was much interested in Dodge’s study of eye movements. When one reads a line the eye moves not continuously across the page but in jerks, and as it moves it sees above and below the line in each of its several positions. So what the retina gets is a succession of snapshots like a movie camera, and the brain does the rest. There was, of course, a good deal of physiology in this kind of experiment. It is interesting that before Dearborn thought he was qualified to be a professor of psychology, eventually of education, at Harvard, he thought he ought to have a medical degree and went to Munich to get one.

George Humphrey did not stay long enough at Wesleyan to earn a professorship. He was a Canadian and went to Queens. But he had genius and originality. He “brought to the department in 1920 a deep interest in the conditional reflex, a development which at that time was taking the psychological world by storm. Humphrey thought the conditional reflex explained everything.” When his baby was born, it is said that he held her out the second story window “to see if she would register fear.” While he was here, he wrote an interesting book on psychology of a rather popular sort, and he told me about it while we were riding on a train. He said the gelehrte would not like it, but I would, and I did. Here is a partial list of the chapters as he read them to me: “Why We Love; Why We Marry; Is Fighting Inevitable?”

During the first World War, Dodge was making tests (eye and reaction tests presumably) to use in selecting gunners for the Navy, and they appreciated this, and other tests he devised for them, so much that they made him a lieutenant commander. When he came back to Wesleyan, very stunning in his new uniform, he gave a rousing talk in chapel to the undergraduates and what was left of the faculty. At that time the undergraduates were mostly in khaki, members of the Student Army Training Corps, and all were required to go to chapel regularly. Some of the time religion took over, and they sang “Onward Christian Soldiers.” On other days, the Army gave pep talks, and they sang “Tipperary.”

Dodge’s talk was both religious and patriotic. The gunner tests were classified, and so Dodge could not publish them. When the next war came and the Navy tried to find them, they couldn’t, and it was in 1942 that Professor Dodge died, so he could not do them over again. But, of course, radar and automatic sighting were soon to take over the problem of gun pointing, and physicists rather than psychologists were in demand.

McClelland himself had only just received his doctorate and had not yet joined our Faculty when Pearl Harbor catapulted us into the second World War. His first interest was in the field of education, but the field in which he achieved greater distinction was to be done after the war, first here and then at Harvard, the measurement of human motivation. He was inspired as a Wesleyan undergraduate by Professor John McGeoch, who made a great impression upon him and stimulated him to become a psychologist. During his brief years at Wesleyan (1935-39) McGeoch, to quote McClelland, “published an important series of research studies on retroactive inhibition as a cause of forgetting, edited the Psychological Bulletin, served on the Council of Directors of the American Psychological Association, and as Secretary of the Psychological Section of the American Association for the Advancement of Science.”

At present the senior member of the department is Robert H. Knapp, a graduate of the University of Oregon, whose service on the Faculty dates from 1946. Besides collaborating with H. B. Goodrich in producing Origins of American Scientists (1952), mentioned previously, he was co-author with a younger departmental colleague, J. J. Greenbaum, of a somewhat similar study, The Younger American Scholar: His Collegiate Origins, published in 1953.

Initially the psychology laboratory under Dodge was “a small room on the North side of South College.” Since it had no sunshine for photographing eye movements, Dodge set up the apparatus in his own home, and Mrs. Dodge served as his assistant and often as a subject of experimentation. In 1904 the laboratory was moved to the second floor of Fisk Hall and later, about 1928, to Judd Hall where, since the renovation of the building in 1958, it now enjoys greatly improved facilities.