In the beginning there were for the college, as a whole, “Departments or General Classes, Moral Science, and Belles-Lettres, Mathematics, Natural Science, Ancient Languages and Literature, and Modern Language.” But the lines between these departments were blurred. For example, in the 1831 catalogue Rev. John P. Durbin was designated Professor of Natural Science, but almost immediately he resigned to become chaplain of the United States Senate, whereupon the instruction in natural science was assumed by Rev. John M. Smith, whose original assignment had been the professorship of ancient languages and literatures.

This presumed ability of a teacher to shift from one subject to another when needed is analogous to a similar custom in preparatory schools until quite recently, and since boys of fourteen could be admitted to Wesleyan in those days, it is clear that the subjects studied were often elementary in nature. Likewise, in those days there was no research in the strict sense of the word. Until after the Civil War, no scientific teacher had studied in graduate school or at least not for long. There was some experimental work, but this was a repetition of experiments that had previously been done elsewhere. Nobody made a brand new contribution to the world’s store of knowledge. But between 1831 and 1861 there were several illustrious teachers and able scholars, so that the history of that period is best described in terms of a few names: Augustus W. Smith (1831-57), John Johnston (1835-73), John M. Van Vleck (1853-1904). There are others who served short terms or did not become professors. One, Harvey B. Lane, a graduate of the Class of 1835, served a long term (1839-1861), but after teaching mathematics and engineering for a few years he became Professor of Greek and Latin and so dropped out of this history. The first science teacher to pursue graduate work of importance was W. N. Rice, who became professor in 1867, and the second was W. 0. Atwater, who began teaching in 1873. Their work will be discussed later. 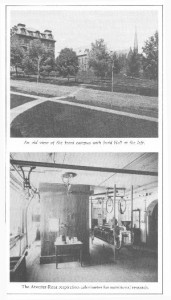 The first specialized scientific department was Mathematics and Astronomy. These two subjects remained together for eighty years. The first professor in this dual role was Augustus W. Smith, who served on our faculty for 26 years. He was highly esteemed as a scholarly teacher, and was the University’s president for five years, 1852 to 1857. Later he held the chair of natural philosophy at the United States Naval Academy at Annapolis until his death in 1866. He was the author of a book on mechanics (“Prepared for the under-graduate course in the Wesleyan University”), a required study which “few ever mastered.” President (later Bishop) Cyrus Foss said of him, “No man ever was to me on the whole so inspiring and admired a teacher.” In addition to his other accomplishments, he was, in the good bishop’s words, “a good conscientious, sweet Christian gentleman.”

John Johnston held the chair of natural science from 1837 until his retirement in 1873. He seems to have been particularly interested in chemistry. He was the author of A Manual of Chemistry (1840; sixth revised edition, 1861), based on Dr. Turner’s Elements of Chemistry. The preparation of this work (according to the advertisement) “was undertaken by the advice of the late lamented President of the Wesleyan University, with the primary design of providing a suitable Text Book on Chemistry, for the use of the annual classes in that institution.” He was the author also of A Manual of Natural Philosophy (1861). The Johnston quadrangle was named in his honor. He was the grandfather of A. W. Johnston of the Class of ’93, who was also an influential trustee (1914-52). When the local firm of Wilcox and Crittenden first began making their world famous coatings for marine tools, the first Wilcox consulted Professor Johnston on how to obtain a proper acid bath to use before the zinc coating should be applied.

The first catalogue of 1831 refers to “a very respectable chemical apparatus” as already provided, “and preparation is also making to procure from Europe, the coming Spring or Summer, an extensive Mathematical and Philosophical Apparatus.” There is in President Willbur Fisks’s handwriting a list of “apparatus” which may have been the original material. The total value is $86.15. There exists another list, signed by John Johnston in 1861, amounting to $7,394.20.

John M. Van Vleck graduated from Wesleyan in 1850. After some time in the Nautical Almanac office in Cambridge he returned in 1853 to teach and continued on the Faculty until his retirement in 1904 at the age of 71. He was a link between the early years and more modern times. Except for an absence of three years he was here either as a student or teacher from 1846 to 1904, from Zachary Taylor to Theodore Roosevelt, and it is appropriate to add that he took a keen interest in politics, national and New York State, all his life. He was a powerful influence here even during the eight years after his retirement until his death in 1912. He met this author one frosty morning and spoke to him gruffly: “Camp, I’ve put a veto on your having that room fixed up. It was good enough for me for fifty years, and it’s good enough for you.” When that veto did not stick, I was utterly surprised and still am. He served several short terms as acting president and was vice-president from 1890 to 1903. Professor Rice said on various occasions that the college owed more to John Van Vleck than to any other man, for it was he who kept the standards high during difficult times.